Mullayanagiri (Kannada: ಮುಳ್ಳಯ್ಯನಗಿರಿ)is the highest peak in Karnataka, India. Mullayyanagiri is located at 13°23′26″N 75°43′18″E in the Chandra Dhrona Hill Ranges of the Western Ghats of Chikkamagaluru Taluk. With a height of 1,925 metres (6,316 ft), it is one of the highest peak between the Himalayas and the Nilgiris.[1] Mullayanagiri is one of the best trekking places in Karnataka and South India. The Sunset presents a spectacular view from the peak. The summit of Mullayanagiri also houses a police radio relay station.

The peak gets its name from a small temple (gadduge/tomb) at the summit, which is dedicated to a Tapasvi “Mulappa swamy” who, is believed to have meditated at the caves only a couple of feet below the summit. The caves are accessible and not very deep, they have a direct entrance to the garbagudi of the temple, which is now blocked by the temple priests. Apart from multiple versions of folklore and strong Siddha culture around the belt, the origins or any information about the deity remains ambiguous.

Anciently, when the present asphalt roads and the 300 concrete steps were not present, a trail was used to reach the peak, known as ‘Sarpadari’ or ‘sarpanadi’. Although it is not very frequently visited now, this trail is cherished by trekkers.

Baba Budangiri is a mountain in the Baba Budan range of the Western Ghats of India. Located in the Chikkamagaluru District of Karnataka, Baba Budangiri is known for its shrine to the Sufi saint Hazrat Dada Hayat Khalandar, a pilgrimage site for both Hindus and Muslims.

The main peaks in this range are the Mullayanagiri and Baba Budangiri (height 1895 m). Collectively, these peaks are known as Chandradrona Parvatha Shreni (Chandradrona Mountain Range)[1] as they naturally form the shape of a crescent moon. 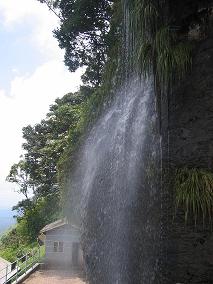 Manikyadhara Falls is near Kemmangundi of Chikmagalur district. It is on the Baba Budangiri Hills, which is a sacred place for Hindus and Muslims. It is one of the main attractions of Baba Budan Giri

It is approximately 40 km from Chickmagalur town.